Creating a new science panel in the wake of the UN Food Systems Summit could critically undermine the ability of existing UN bodies to guide food systems reform. This was the message conveyed to the UN Secretary General in an open letter, amid concerns that the Summit’s Scientific Group will be turned into a permanent body.

The letter warned that the people on the frontlines of our food systems need reassurances that the institutions in which they have invested time, energy and hope – the institutions where they feel heard – still matter. Scientific advice for policymakers should not be fast-tracked if this means excluding the diverse perspectives that make it relevant in the first place.

Concerns raised clearly and consistently by farmers’ organizations, social movements, civil society, Indigenous Peoples, and independent scientists, have yet to be addressed by the organizers of the UN Food Systems Summit. The Summit continues to threaten replacing democratic debate with increasingly unaccountable modes of decision-making. These challenges undermine the work being done in good faith by many actors within the UNFSS process and set a dangerous precedent for the entire UN System.

IPES-Food welcomes the work of States and other allies in bringing attention to the transformative potential of agroecology and ensuring its place on the pre-Summit agenda. However, it is with regret that members of IPES-Food are stepping down from roles held within the Summit process due to lack of resolution on a number of fundamental governance issues. 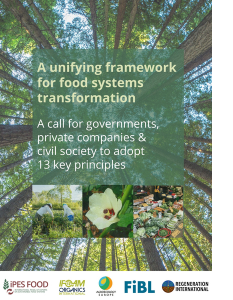 More than 800 international organizations, NGOs, farming groups and experts want agroecology, organic, and regenerative agriculture to top the agenda at this year’s UN Food Systems Summit. The voices from six continents are calling on governments and businesses to take action once and for all on the “damaging” status quo in global farming.

“In the run up to this UN Summit, certain groups have been playing fast and loose with the meaning of sustainability,” warned Emile Frison of IPES-Food, and co-founder of the call. “Conventional agriculture – with its heavy reliance on chemical inputs – has failed millions. It continues to deplete soils, damage biodiversity, drive climate change, and destroy livelihoods. Nothing short of a food systems transformation will steer us to safety.”

The Call sees proponents of agroecology, organic, and regenerative agriculture unite around the 13 principles of food system transformation set out by the High-Level Panel on Food Security and Nutrition in a landmark 2019 report. 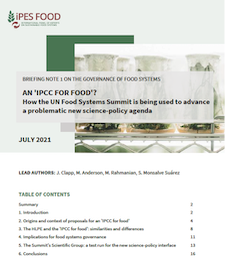 In a new briefing note, IPES-Food warns that the UN Food Systems Summit (UNFSS) is being used to advance a new mode of decision-making that could exclude many voices in food systems.

A small but influential group of actors has long been demanding the creation of a new panel — an ‘IPCC for Food’ — to streamline decisions on the future of food systems.

On the eve of the UNFSS Science Days, where the idea will be showcased, IPES-Food underlined the importance of science-based decision-making. However, the briefing note warned that the new panel – as planned – risks imposing a narrow view of science, and shutting down democratic debate.

The new panel could also undermine the High-Level Panel on Food Security and Nutrition (HLPE), which already provides scientific guidance to governments, taking into account diverse knowledge and perspectives from across the food system.

IN CASE YOU MISSED IT | More on the UNFSS

Listen to a special IPES-Food podcast with IPES member Melissa Leach in conversation with Martin Cole, chairperson of the steering committee of the High-Level Panel of Experts (HLPE) on food security and nutrition. Professor Leach and Professor Cole discuss the role of the HLPE and the issues surrounding new proposals for a new science-policy interface for global food systems governance (July 2021)

Listen to a podcast with IPES-Food panel member, Emile Frison, on the role agroecology can play in framing food systems transformation at the UN Food System Summit (July 2021)

Read an op-ed by three UN Special Rapporteurs on the Right to Food, past and present, including IPES-Food co-chair Olivier De Schutter, on how to get the Summit back on track (March 2021)