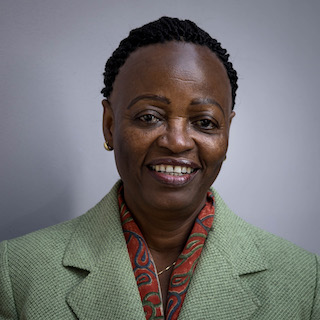 is co-chair of IPES-Food. She is a Senior Consultant on Nutrition and Sustainable Development who served as UNICEF Country Representative in Kenya (2007-2012) and has held other senior roles in the UN system. She is a Tanzanian national with a PhD from Cornell University. She has extensive programming experience in nutrition, development, and international cooperation, with vast programming and research work including a focus on infant and young child feeding, nutrition and HIV & AIDS, cash transfers for vulnerable children and households, and a human rights-based approach to programming. She has made contribution to the understanding of the relationship between nutrition status and mortality in children through her primary doctoral research.

She has worked with UNICEF in several senior positions including as Country Representative in Kenya (2007-2012) and Laos (2003-2007), Regional Nutrition Advisor Eastern and Southern Africa Region (1997-2003), and Chief of Nutrition and Child Development in India (1992-1997). In 2002, she was a member of the UN Secretary General’s Special Envoy Mission looking into humanitarian needs in Southern Africa resulting from a combination of drought and HIV and AIDS.

Olivia Yambi has co-authored a number of publications including the following: